Charles Hyne was a mariner in the East India merchant service. He was born circa 1805 in Devon, England.

Charles Hyne was born circa 1805 in Devon, England. Information related to his masters certificates (second class issued in 1849 and first class in 1851) list his birth place as Portlemouth, Devon, England and 1805 as his birth date. I have found bishop’s transcripts of baptisms from the [East] Portlemouth parish recording a baptism of Charles Hyne and Louisa Hyne on January 14, 1806. The parents are listed as John and Grace. There are baptisms for two other children of John and Grace in [East] Portlemouth, Harry Hyne in 1808 and William Elias Hyne in 1811. Scanning through the bishop’s transcripts, I have found no other mention of any Hyne’s in the parish.

On January 4, 1836 he requested a license to marry Louisa Hole Carruthers1Source. They married on January 6, 18362Source.

In the 1841 census, Charles, Louisa and the young Charles are in Plymouth, Devon, in the residence of Mary Hyne & Susanna Hyne, two spinster sisters, both born in Blackawton, Devon. According to both Mary’s will and Susanna’s will, Charles was their nephew, son of their brother John. This census record suggests Charles’ birth occurred in 1811, however for the 1841 census, census takers were instructed to round the age of anyone over 15 years old down to the nearest multiple of 5.

In August 1841, a second child, Harry Hyne, passed away aged only 2 months. Harry was likely born shortly after the 1841 census in June.

Louisa often travelled with her husband back and forth between England and India. In fact, it was on-board the “Carnatic” that their third child, William Harry was born, in Bombay harbour on January 3, 1844. Their fourth child, Harry Charles was born in approximately May 1845 (possibly on a return trip from India). Harry (Henry in some records) Charles sadly passed away January 15, 1846 in Bombay, aged only 8 months and 11 days (see below).

Charles and Louisa’s fifth child, Richard Harry, was born in 1848 on-board ship in the English Channel.

In 1850 their sixth child, Harry, was born, in Middlesex. Around this time, Charles was made captain of the “Agincourt” (launched 1841).

The “Seringapatam” was owned by R. & H. Green of Blackwall, and was build at the Blackwall shipyard by Green, Wigram’s & Green. It is considered the first of the Blackwall frigates.

As near as I can tell Charles made a single round trip to India as captain of the “Richmond”, arriving in Calcutta in January of 1840. I’m not sure who owned the Richmond, but the “Seringapatam” and all future ships on which Charles served were owned by the Green Family of Blackwall.

On July 9, 1851 Charles was issued his Certificate of Competency as Master. On the certificate, above his signature he gave his address as 64 Cornhill (which I believe was actually the office address of his employer, F. Green & Co.) and listed his date and place of birth as “1805, Portlemouth, Devon”. I believe this is the best source I have found yet for his true date of birth, and from this information have been able to find what I believe is his baptism, and that of his sister Louisa, who I believe is the same Louisa Hyne featured on this site.

In 1855, Charles was made captain of the “Agamemnon” (launched 1855). An image of this ship is available from the National Maritime Museum, Greenwich, London. 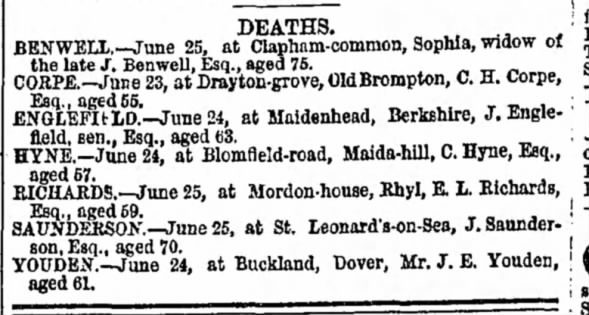 Charles is listed in the England & Wall, National Probate Calendar collection on Ancestry, and I was able to order a copy of the will from the Probate Search service of the UK government (despite the will not appearing in their search page). The will itself is a challenging 2+ page document which I have yet to fully decipher, but I have thus far determined he left a relatively sizable estate behind, and named two executors: James Thomas Bell (who has appeared frequently enough in the Hyne Family history as to perhaps merit a page of his own on this website), and Frederick Hyne of Jersey (Channel Islands), a name I had not encountered until reading Charles’ will.

This website uses cookies to improve your experience while you navigate through the website. Out of these cookies, the cookies that are categorized as necessary are stored on your browser as they are essential for the working of basic functionalities of the website. We also use third-party cookies that help us analyze and understand how you use this website. These cookies will be stored in your browser only with your consent. You also have the option to opt-out of these cookies. But opting out of some of these cookies may have an effect on your browsing experience.
Necessary Always Enabled
Necessary cookies are absolutely essential for the website to function properly. This category only includes cookies that ensures basic functionalities and security features of the website. These cookies do not store any personal information.
Non-necessary
Any cookies that may not be particularly necessary for the website to function and is used specifically to collect user personal data via analytics, ads, other embedded contents are termed as non-necessary cookies. It is mandatory to procure user consent prior to running these cookies on your website.
SAVE & ACCEPT